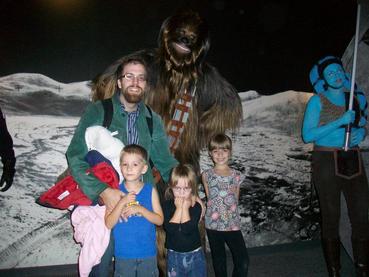 Ryan M. Jones is part librarian, part database tech, a path he undertook when he realized his degree in Classical Greek would result in the starvation of his family. He lives in North Carolina with his wife and three kids. They host an ever changing cast of creatures that has included 4 ferrets, 50 genetically aberrant snakes of various species, a tarantula, scorpion, two praying mantises, hundreds of flightless African cockroaches, hordes of rats and mice, and two dogs. Not all at once, but it felt that way. He writes speculative fiction in moments wrestled out of his daily schedule in much the same manner that one might wrestle a bear whose cubs one wishes to make into comfortable slippers.

He and his wife are doing our best to raise their kids with a deep love for imagination- if you never dream of the way the world could be, you’ll never reach beyond what the world actually is.